Over the ages and in all cultures, animals have been woven into the fabric of community and family. In our era this relationship has grown closer, with more of a personal link between humans and companion animals.

According to a the American Pet Products Association annual survey of pet owners, nearly two-thirds of people consider pets to be family, and more than a third consider them companions. In a 2015 Harris poll, 95% of American pet owners said they consider their pets to be family–the highest percentage ever. Nearly half buy birthday presents for their animals, nearly a third cook for them, and 71% will sleep in bed with them. 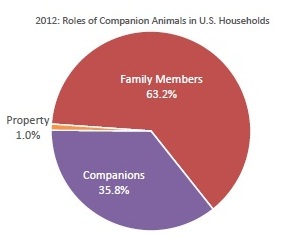 The dark side of this trend is that as animals move more into the home, they also come into situations of family violence. Animals do not have the same legal protections as humans, so they can be used as pawns in the dynamics of family power. Thousands of studies from the fields of psychology, sociology, criminology, and law support the link between animal abuse and human abuse.

It is conventional wisdom that animal abuse precedes human violence, but in fact the two are often co-occurring and interwoven. Domestic abusers may harm or threaten animals to exert power over their human victims, to show what might happen to them, and to prevent victims from leaving or speaking about their abuse.

Understood as part of a dynamic of violence, animal abuse cases present an opportunity to intervene and break the cycle. Domestic violence victims are generally reluctant to speak to outsiders about their abuse, but may more easily reveal acts of cruelty toward their pets. Likewise, outsiders will more readily report animal cruelty than suspicions of domestic violence. Since animal abuse is often the “tip of the iceberg” for family violence, criminal behavior, and substance abuse, animal agencies have the opportunity to serve as first responders for families in crisis. Children who talk about pets that have died or disappeared, or who are cruel to animals themselves, may be signaling that further investigation is necessary.

WHEN ANY FORM OF VIOLENCE IS PRESENT, EVERYONE IS AT RISK

Since 2001, Positive Links has been training professionals (animal control officers, police, health care officials, educators, and others) to take animal cruelty seriously, recognize it, and act on it so that victims and abusers get help. Made up of advocates from the fields of domestic violence and animal protection, the Positive Links board advocates for laws to protect all family members from violence. This includes ensuring that animal abusers receive the treatment they need to re-instill empathy and break the intergenerational cycle of violence.

The Link has been recognized throughout history 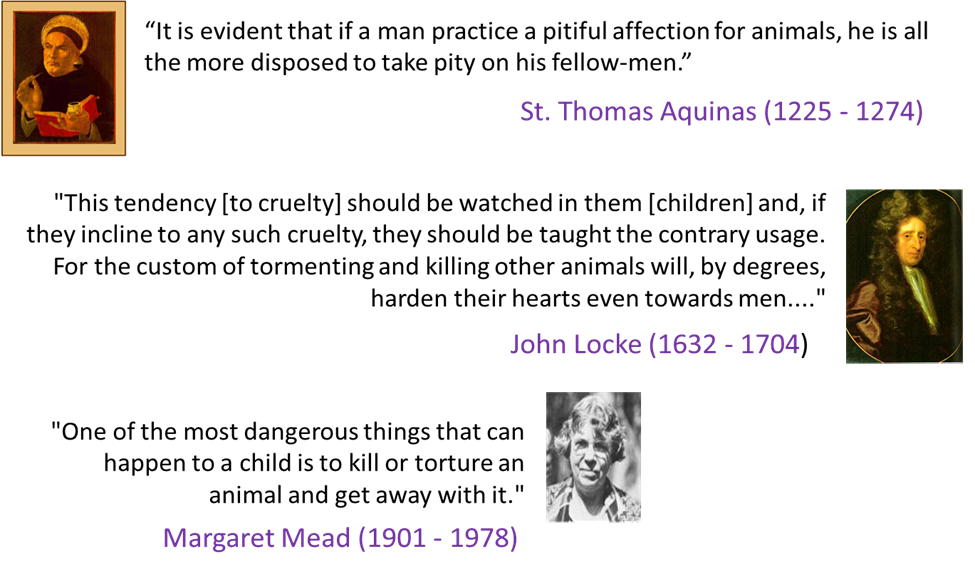 ANIMAL ABUSE IS A SERIOUS CRIME

n all 50 states, animal cruelty is treated as a felony. As of 2016, in recognition of The Link, the FBI has begun tracking cases of animal abuse independently of other crimes. 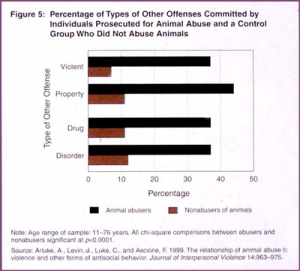 Animal abuse is also closely linked to other types of crime:

WHAT CAN BE DONE?

Clinical criteria are being developed for animal abuse cases, known as veterinary forensics (“Animal CSI”) that helps prosecute abuse cases and demonstrate the importance of intervention.

A psychological treatment program for offenders known as the AniCare method is being used as an alternative to prison time (much as rehab is used for drug offenders) that helps re-install empathy and prevent recurrence.

It is important that professionals who interact with the public especially make it a habit to report all forms of abuse before they escalate.

Public citizens can push for better protection for animals in the form of stronger laws, and push their public officials to enforce the laws that are on the books, from animal control officers and police to judges and courts.

THE LINK TO CHILD ABUSE

In a 2001 study by the Humane Society, two-thirds of cases in which animals were deliberately harmed also involved abuse of a child. A Canadian national survey also found that about two-thirds of homes with reported child abuse had reported instances of animal cruelty.

This link is especially damaging because it operates both ways: Children exposed to animal abuse are highly likely to abuse animals themselves.

New evidence also shows a strong correlation between bestiality (sexual abuse of animals) and child abuse. According to the report Bestiality Laws in Preventing, Prosecuting Sex Crimes for Bloomberg BNA, there is a push toward enforcement of bestiality laws at the state level because of growing evidence of this link.

Child abuse consists not only of threatening to hurt a pet, but making children witness animal abuse (including dogfighting). Exposure to violence has long-term effects on emotional health. According to one survey (Faver & Strand, 2003), two-thirds to three-quarters of animal cruelty that happens in the home occurs in front of children. Witnessing animal cruelty as a child was found to be the single biggest predictor of future violence, making children eight times more likely to be violent (DeGue & DiLillo, 2009).

Professionals who work with children have an opportunity to intervene because children tend to speak easily about their pets, not having been coached about what to say. The Boat Inventory on Animal Related Experiences (BIARE) provides a framework for identifying situations where further investigation may be needed.

THE LINK TO DOMESTIC VIOLENCE

Domestic abusers take advantage of the vulnerability of pets and the family attachment to them to exert control. This helps perpetuate an atmosphere of terror (sometimes called “intimate terror”) and prevent victims from speaking out or leaving. It also warns of what might happen to them, while taking away a last source of comfort and safe refuge. 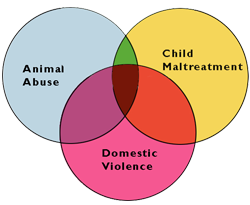 Multiple studies have found that the percentage of battered women who stay in abusive situations because of their pets ranged from one-fifth to nearly half. Most shelters do not accept pets, and families may be terrified of leaving a pet behind. A study of battered women found that nearly three-quarters reported that their abuser had hurt or threatened to hurt a pet; more than half said he had actually done it (Ascione et. al,1998).

Moreover, “batterers who also abuse their pets are both more controlling and use more dangerous forms of violence than batterers who do not” (Simmons & Lehmann, 2007).

A lethality assessment used by law enforcement lists the top three indicators that a woman is in danger of being killed by her abuser: (1) Gestures/threats of homicide/suicide, (2) Access to weapons, (3) Threat to hurt or kill companion animals.

What can be done?

The most important step is to get the family out of harm’s way. Some states now allow companion animals in protective orders (including New Mexico). A growing number of domestic violence shelters are offering help with housing animals. In New Mexico, the CARE program finds shelter for pets of families fleeing domestic violence: 844-323-2273.

For professionals dealing with domestic violence victims, it is important to ask questions about the entire family, including companion animals, to gauge the level of threat.

THE LINK TO ELDER ABUSE

Elders can be taken advantage of through their attachment to companion animals because they are often quite dependent on their pets for comfort and company. Elder abuse is the latest chain in the link to emerge through research into domestic violence. 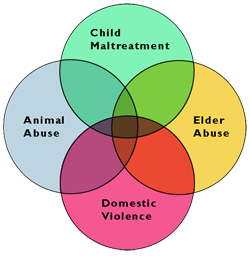 Elder abuse most often takes the form of coercion, often financial, by family members and/or caregivers. It is believed to be greatly underreported (one estimate was only 1 in 14 cases) and also on the increase.

Professionals who work with the elderly should make it a point to inquire about the well-being of companion animals as well as seniors themselves–the animals’ relationship with other family members and who walks and feeds them.

Elderly pet owners can be connected to community resources for help with pet food, veterinary care, and pet services so they are not dependent on one person or group. Responders who deal with the public behind closed doors should not neglect elderly residents in their questionnaires.